Do RVs Have to Stop at Weigh Stations? 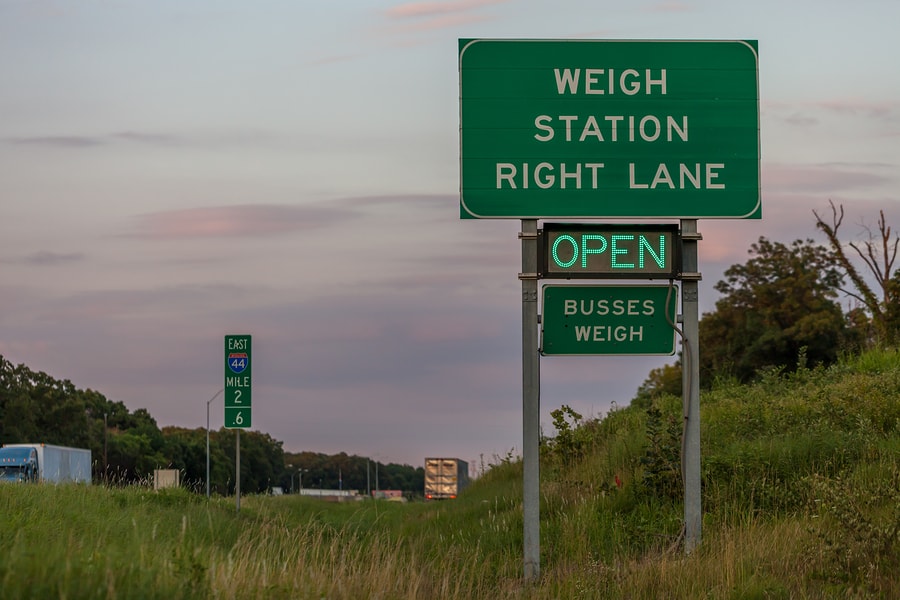 Do RVs Have to Stop at Weigh Stations?

For 98% of you out there – the short answer is probably not.

Browsing through the forums, you will come across a strong majority of RVers that driven by the weigh stations for decades without an issue.

You will probably be safe going with that assumption.

However, I am not going to recommend one way or the other because there is a lot of self contradiction within the government on this particular subject.

That is why I am going to give you the information that you need to choose how you want to handle this murky legal situation.

The Letter of the Law Versus the Heart of the Law

The subject of RVs and weigh stations could not be more confusing.

After all, how could the following phrasing not be more clear?

“Any peace officer having reason to believe that the weight of a vehicle and load is unlawful is authorized to require the driver to stop and submit to a weighing of the same by means of either portable or stationary scales and may require the vehicle to be driven to the nearest public scales. If the officer determines that the weight is unlawful, the officer may require the driver to stop the vehicle in a suitable place until such portion of the load is removed as may be necessary to reduce the GVW to the permitted limit.

These straightforward laws are complicated by the stated experiences of our fellow RV drivers.

Almost all of them state that they have been driving the roads for multiple decades and they have never had to pull over, and those that do pull over are often on the receiving end of an annoyed weigh station attendant that has apparently dealt with the same RV issue over and over again. “

The laws only apply to commercial drivers” is declared, and the RV driver is vehemently showed the proverbial door.

Another example of this back and forth behavior is shown very clearly in Maryland. According to the FAQs on the Maryland Mdot website,

An RVer contacted the Maryland State Highway Administration for clarification and received the following response:

“You are correct, you would be required to enter. Although you are driving a RV for non-business use and are exempted from the commercial regulations, you must still enter the scale house with your vehicle as required by the signs ‘All vehicles over 5T GVWR/GCWR must enter’ The reason being, if you use an RV for business (such as transporting a musical band that receives compensation) all regulations would apply at that point, but the only way an inspector would know, is if you would make yourself available for interaction with the facility staff.”

However, according to multiple posters, if you stop at a Maryland weigh station you will be treated rather harshly.

“They made it clear that I was in the way and that I should get the heck out of the way!”

Another poster called the Maryland Department of Transportation and was told that the letter of the law stated that Recreational Vehicles are required to be weighed, but that the spirit of the law was for commercial vehicles only.

Furthermore, that the recreational vehicles portion was not enforced, so it was recommended to just pass by the weigh station without stopping.

I am someone that will wait for a crosswalk signal in the middle of an abandoned ghost town, so this unclear back and forth behavior within the government is aggravating to say the least.

For convenience and efficient processing, weigh-in-motion plates are sometimes installed into the roads near near weigh stations, and those plates can be triggered by a heavy RV.

If triggered, a sign will usually flash to signal the truck driver “you” to pull over.

It isn’t operated by a human trying to get your attention, so  you can generally ignore that sign that is lighting up.

The frustrating part is that your weight might be relayed to a nearby and waiting officer in the unlikely instance that it was meant for you. They probably won’t care though.

Once again, frustrating because you could wind up with a ticket if the police officer cares enough to stop you and then chooses to not be lenient.

The Letter of the Law

For those of you that want to attempt to follow the letter of the law, read below and I will do my best to relay the information that I have found.

Just know that based on the stories, you are pretty likely to immediately encounter a weigh station that shoos you away. I don’t want to discourage you from stopping, but I want you to be aware of the probable outcome.

Also, laws change, so here is a link to a hub page on the Department of Transportation’s website that you can use to find the current laws regarding the states that you intend to visit.

In the states where the laws do apply to residential RVs, on average, 10,000 pounds is a pretty safe assumption.

There are exceptions, so you should still be aware of the laws of any state that you plan to drive through.

States that require only Commercial Vehicles, Agriculture Vehicles, or Trucks Vehicles to stop if their GVWR is 10,000 pounds or more.

States that require privately owned RV, Speciality Vehicles, Passenger Vehicles or Trailers to Stop if GVWR is more than 10,000 pounds.

States Where All Commercial Vehicles Must Stop Regardless of Weight

An RV can be classified as either an RV or a Truck. Depending on how yours was registered, you will or won’t need to stop at the weigh stations.

The are states below use weights other than 10,000 pounds, and some have unique processes.

I’m having trouble sourcing this quote, but the AAA states “The Secretary of the DPS may adopt such regulations and procedures as may be necessary for law enforcement weighing purposes.”

3. Missouri
All commercial trucks with a GVWR over 18,000 pounds are required to stop at the weigh stations.

4. Montana
All agricultural vehicles with a GVW of 8,000 pounds or more, and business-owned RVs

5. Nebraska
According to AAA, Nebraska Law states, “All trucks over 1 ton must stop, except a pickup truck pulling a recreational trailer.” I’m having a little trouble finding this, but AAA has been mostly reliable in my research.

6. New Jersey
Apparently, in a moment of rebellion, New Jersey decided to go with 10,001 pounds. All vehicles, both commercial and residential, matching that number and above must stop.

7. New Mexico
Any trucks weighing 26,001 pounds or more must stop. Commercial isn’t specified, but not many privately owned trucks are going to come close to that number.

Whether one vehicle or many chained together, you must stop if your total weight is 26,000 pounds or more.

Agricultural vehicles, trucks, and drive-away operations over 8,000 pounds GVW need to stop at the weigh station.

10. Wyoming
Any vehicle that is involved in transporting people or property that has a GVW, GCWR, GVW, or GCW of 10,001 pounds or more. I’m assuming that this one is referring to commercial transportation since unmanned trucks aren’t yet commonly available.

11. Virginia
Trucks over 7,500 pounds need to check in with the station.

Conclusion on RVs and Weigh Stations

Okay, that is about as much mud as I could remove from the water.

I hope the you can see through this murky lake of weigh station laws.

Like I said at the beginning, I am not going to recommend one action or another because there seems to be potential to receive a ticket and I honestly don’t want that on my head.

What I will say is that the law seems to say one thing, but the weigh stations and police officers generally seem to operate as though another is in its place.

I believe this to be the case because the heart of the law intends for this to be a source of commercial taxing.